On the last day of February I set out on a road trip with no particular destination. My only goal was to stay off interstate highways as much as possible and, if time allowed, visit Big Bend National Park in Southwest Texas on the US/Mexico border.

These are the places I saw along the way.

Wyoming was beautiful, despite the bleak winter skies. I managed to get a few shots from the road. I kept hearing on the radio that a bad winter storm was on it's way. I needed to get ahead of that storm so I drove fast, putting on nearly 700 miles my first day. The following day, that storm caused a terrible pileup on Interstate 80 with over 100 vehicles involved, dozens of injuries, and 3 deaths.

I stopped for the night just south of Fort Collins, Colorado. The following morning I was greeted to an epic sunrise which I took to be a good omen for my future travels.

As the day began I was immediately drawn to this tall mountain in the distance which I would later find out was the famous Pikes Peak standing at 14,115 feet tall.

As I approached Colorado Springs, Pikes Peak was in full view. At the base of the mountain, I stopped at the Garden of the Gods and did some exploring.

On a whim, I decided to cut south-west toward Salida, Colorado following the Arkansas River for many miles. The scenery was breathtaking.

It was mid-afternoon when I arrived at Poncha Springs. I turned south down highway 285 and discovered the majestic San Luis Valley, the headwaters of the Rio Grande.

The next morning I found myself at the Rio Grande Gorge which I continued to follow through to Roswell, New Mexico.

In Roswell, nearly every building seems to have either an alien or UFO out front.

After the sun had set it started to rain. I was determined to get to Texas so I pushed through the night down highway 285, eventually stopping in Fort Stockton. When I awoke and got breakfast, the shape of my waffle confirmed that I had arrived in the great state of Texas.

I continued onward down highway 385. It was time to see what Southwest Texas was all about.  I was not disappointed.

Not sure where to go next, I headed to El Paso then continued onward in a north-westerly direction. I didn't take many photos until I found myself in White Sands, New Mexico and started wandering through the beautifully surreal landscape.

I started walking toward Ute Mountain and almost got arrested. I apologized to the officer for not noticing the "No Trespassing" sign. It's a bad habit that I have.

I had become so enamored with Colorado that I decided to do some more exploring. I followed the Dalores River toward Telluride. The mountains were huge. Spring was in the air and I had the road all to myself.

As luck would have it, I found a beautiful camp site on BLM land next to the San Miguel River. I called it a day, drank some scotch, played guitar, and enjoyed the sunset.

After the sun went down, I set up my camera to get some shots of the stars. Suddenly a string of lights appeared out of nowhere and began flying by Venus, one by one. Was it a UFO? Probably not, but I like to think so.

I continued down the San Miguel the next morning then set my sights on Arches National Park. It was even more amazing than I expected, and my expectations were high. 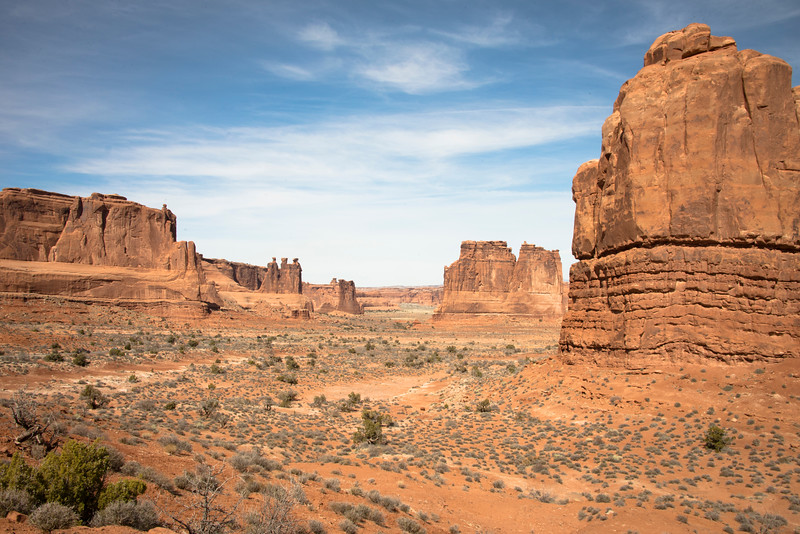 After only 8 days, I had driven over 3000 miles and seen many worlds. I returned home to the snow lands of Montana.